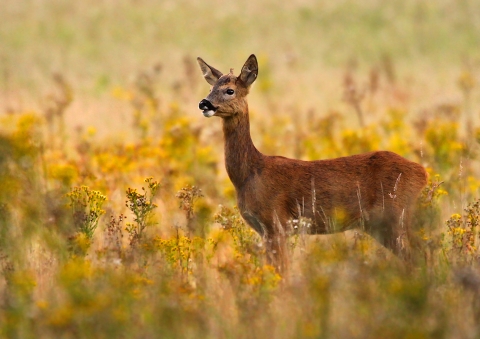 Within Great Park there is mosaic of habitats including wetlands, woodlands, woodland edge, open grassland and meadows, all which are a home to a variety of wildlife.

Why not head out for walk with our wildlife questionnaire and let us know what you see:

The River Ouseburn runs west to east through the southern end of Great Park and is home to a variety of living creatures. Freshwater shrimp and small fish, including sticklebacks, are a perfect food source for kingfishers, which can be seen flying up and down the river close to the water. Otters are also known to have returned to this river in recent years, following a long period of absence. These graceful and elusive creates are a fantastic indicator of the cleanliness and diversity of the river. Recently there has been an increase in hedgehog numbers along the Ouseburn.

South of the River Ouseburn, but north of the Greenside Estate there is a meadow area which was planted as part of the development. Paths, known as ‘Wellie Walks’ are mown throughout the Spring and Summer, along with several circular areas where you can stop and admire the wildflowers and other flora and fauna. At the end of the flowering season, when the seeds have been produced, there whole area is cut and the cycle starts again the following year. This form of management allows the wildflowers to flourish, which in turn attracts insects including butterflies such as meadow browns and skippers.

North of the River Ouseburn is an area know as Ouseburn Meadows. This area can be accessed via a public footpath, though the ground here can often be quite damp. Mammals such as foxes, roe deer and rabbits have all been seen here.

There are several SuDS (large wetland areas) within the Great Park. The aim of SuDS is to reduce surface water flooding from the built environment and to improve the water quality of the local river system. Surface water is stored in the SuDS and slowly released into the Ouseburn, reducing potential flooding further down the river.

Frogs and toads, mallards, herons, dragonflies and damselflies, can all be found in these wonderful wetland areas. The vegetation around the SuDS is also rich in a variety of wildflowers such as vetches, clover and knapweed, all of which are valuable to pollinators including bees and butterflies.

The young trees planted near the wetland areas are mainly willow and alder. Both these trees thrive in wet conditions and in years to come will add an even greater variety of life to the area. Reed Bunting can be seen all year round amongst the reeds and in the summer Reed and Sedge Warblers can sometimes be heard.

The former wagon way, now accessible as a public footpath, runs northwards through the Great Park. The wagonway is bordered by a hedgerow that provides shelter and food for a variety of birds and mammals. This green corridor enables wildlife to move safely around the site. The hedgerow includes traditional species such as hawthorn, blackthorn, dog rose and hazel.

The SuDS here mainly contain common reed, a tall plant that forms extensive stands known as reed beds. This habitat is great for many birds, but especially the reed and the sedge warbler. Reeds help to filter any pollutants from the water and in the past would have been harvested for thatching.

The woodland here is well established having been planted over 20 year ago. Birds will benefit from shelter and nesting sites within the tree canopy, whilst fungi and damp-loving insects will take advantage of the dark woodland floor. The rough vegetation along the woodland edge also provides another valuable habitat. This wooded area provides cover for roe deer and the open area closest to Brunton Land and the A1 are great for seeing orchids – Northern Marsh, Common Spotted and Early Purple.

Ash trees grow along the edges of the circular meadow, which itself contains large amounts of the aptly named meadowsweet along with scabious, thistle and knapweed.

Register as a ParkLife member today to be kept up to date with the latest news from across Thorpe Park Leeds, to receive access to exclusive discounts, and to be part of our growing community.