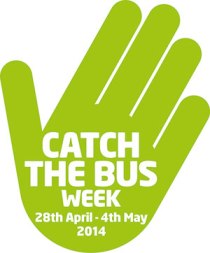 If you are not a regular bus traveller or you’ve not taken your trip to work by bus before,   then this is a fantastic chance to give it a go during  Catch the Bus Week between 28th April and 4th May.

About Catch the Bus Week

Catch the Bus Week was first launched in 2013 in partnership with bus operators throughout the UK. The bus companies participating in Catch the Bus Week 2014 include Arriva, Stagecoach, FirstGroup, Go-Ahead and many local companies.

The aim of the campaign is to try and encourage those who don’t normally travel by bus to give it a go and to see for themselves the real benefits’ jumping on the bus has.

Bus travel is not only less stressful than driving and healthier but also a cost effective way to cut carbon and reduce congestion.

Interesting fact Alert…. By Switching from car to bus for just one journey a month would mean one billion fewer car journeys on our roads and would save 2 million tonnes of CO2 every year. Impressive!!!

Arriva North East will be updating their website with details of their offers/incentives during catch the bus week soon.